Obviously we are in no position to produce a new runs list which in theory should start this Sunday. We'll have to await further news from the government followed by Cycling UK advice and interpretation. Even then members will be making their own independent decisions based on circumstances and what they feel comfortable with. Then there is the issue of cafes and how we can best support them as they re-open. I guess there is someway to go on all this.
I do hope you are being able to remain active and to enjoy some cycling on the very quiet roads but of course we are missing each others company and chat. Having just read Parker's blog below, I suppose we are better off than cyclists in France. Schadenfreude - but that's German (and they may be better off).
Posted by Mike B at 11:37 No comments:

Some news from Corsica

My Cycling UK magazine has just arrived. I know it's late, but it's miraculous that it's here at all considering that the post is always slow here anyway and on top of that there's that virus thingy.

So, I open it up and think cripes, that's me on the front cover! A second glance reveals it's someone a bit older and less handsome than me.

This reminds me of something I once overheard on a clubrun.
"Anon: “Have you seen that new book that’s just come out? It’s called ‘What Every Woman Wants’”
Ludo: “No, I haven’t seen it – is it any good?”
A: “I haven’t had chance to read it yet. All I’ve done so far is have a quick look at it in Waterstones book shop to make sure they’ve spelt my name right.”

If you're wondering why I'm blogging so much lately, it's because cycling is banned in France due to the virus and there's a limit to what you can do with the extra time this generates; there's only so much gardening and DIY to be done. The good news is that the FFCT (French equivalent of Cycling UK, but not as good) has organised a partition to the government to lift this ban and put things in line with the UK and (some) European countries. 90,000 signatures so far, so hoping this will have some effect.

Demise of the Sustrans Hartside Milepost???

Couple of days back Rachel texted that the Sustrans milepost at Hartside had disappeared!

For those that aren't aware, it was on the land of the previous owner of Hartside Cafe, Catherine Renwick.  How did it get there? Well, some 5 years ago as one of the local volunteer Sustrans Rangers, I kicked off a project to have the milepost moved from its location on the off road C2C track leading to Hartside where hardly anyone saw it, to the roadside at Hartside pass to be in plain view of cyclists, walkers, bikers, cafe visitors etc.  Knowing the then owner of the cafe, I asked if it would be ok to site it on her land  to which she readily agreed. A group of  three volunteers and our Sustrans group coordinator dug a hole and cast a concrete block weighing over half a tonne, the milepost was later attached to it and Ruth & I painted it.

It stood in resplendent glory for over a year until a car slid on the ice (nobody hurt) and snapped it off at the base. I arranged a local welder to go up and repair it, but sadly in the intervening couple of days it was stolen, presumably for scrap. Still kicking myself not to have organised a few folks together to move it out of sight (needs 3 to lift it), but that's water under the bridge. Eventually after over a year's nagging by another  local ranger John Bennet, Sustrans came up with a redundant milepost which we installed, but had to have the distance 'ears' remanufactured by the original foundry in Wales - again sorted by John after loads of hassle. The milepost was a different design than the original (there were four designs) and Ruth and I painted that too.

After the fire at Hartside cafe two years ago, after much soul searching Catherine Renwick decided to sell the site. A local lady turned property developer (Sarah) Dawn Dixon has acquired it. At the time I asked Catherine to mention the milepost to new owner and ask on behalf of Sustrans if it could remain; whether this happened I don't know.

But it was there behind the fence erected whilst demolition of the site was in progress - until Rachel noticed it wasn't. I rode up yesterday to see for myself and found it laid in one piece, complete with unearthed concrete block, at the rear of the site! Presumably easier for contractors to lift it complete with concrete with their digger, rather than remove the four mounting bolts and leave the concrete in situ ... 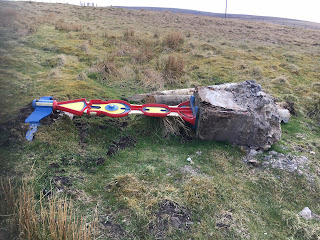 So I'm trying (presently without success, work in progress) to make contact with this new owner Dawn to discuss whether she will be prepared to reinstate the milepost. Reluctant to involve Sustrans unless finances or legal aspects raise their heads, as Sustrans  bureaucracy, unlike the old days, will likely stall progress for months!
Posted by Les at 21:09 No comments:


I originally had the titles in French and it formed part of a slideshow I gave in the village hall in Lama, but I've now redone it in English, so if you would like to watch it click here

Well, Parker surmised and Geoff offered to look at  more photos to identify what had happened, but nobody looked carefully enough to solve my little test!

Wielding allen keys was but a red herring; the head set hadn't twisted round when the bike fell - simply the complete forks, wheel and handlebar assembly had turned 180 degree and faced rearwards! Arriving at the scene, without thinking I'd assumed the headset had twisted round, so loosened its allen bolts and  twisted the bars 180 degrees back, but the front brake cable wouldn't reach .... at which point I realised that the front forks were facing backwards!
Posted by Les at 20:52 2 comments:

'Bicycles are the new toilet paper'

If even Les can’t work out what happened, then it really must be a mysterious mystery. One possibility that has occurred to me is that with all the jiggling about, the outer cable may have slipped back through the ferrule on the brake lever, thus making it appear shorter than it actually is.

And talking about mysterious mysteries, the reason I've put this comment on as a new post is that the club blog will not allow me to add comments, even though I'm signed in. However, as I'm sure many of you will have noticed, it does allow me to add new posts. Geoff has offered some ways round this problem, but I can't make any of them work and he agrees it's a mystery. And as I said for Les, "If  even Geoff can’t work out what happened, then it really must be a mysterious mystery"!

As most of you know Ruth rarely cycles, preferring 2 feet on fells to 2 wheels on tarmac. However with the c-thingy restrictions, cycling locally a good option, so she has been taking my old mountain bike out for a few miles - without me to nag her to go faster!

Got a rescue call - she'd propped the bike against a wall at Kirkland and it had fallen over. On getting back  on she couldn't work the brakes or gears but couldn't fathom out what was wrong .... her knight in shining armour (your truly) laughed his socks off and got out an allen key.

A mystery remains - when  corrected, the front brake cable outer simply was not long enough to reach the calliper bridge even after several minutes of head scratching and re routing. So she rode back on rear brake only and I am flummoxed - about to go and don thinking cap .... 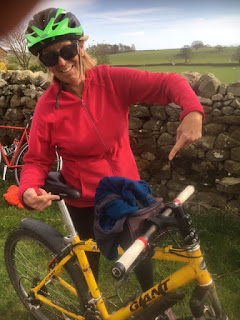 Cartoon from Fellowship of Cycling magazine 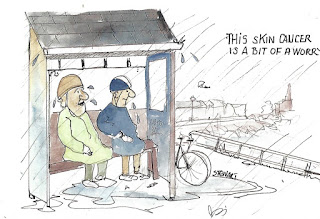 Thanks to Andrew Millward, editor of FOC, for permission to reproduce this.
Posted by Parker at 09:58 No comments:

ADVICE/HELP re bike for friend

I have a friend who would like to acquire a bike for road cycling, nothing posh, ideally something second hand to get into cycling. Inspired I think by meeting Eden ctc members ....He is 6ft 3 and reasonably well built ( i.e. he is not a whippet), I have 2 questions:

i) what size frame - approx -  should I recommend he looks for? ( and no I don't know the length of his arms or his back but assuming standard 6 ft 3 male length arms and back)
ii) does anyone have an old road bike gathering dust in their  garage /shed that would fit a 6 foot 3 bloke and they might want to sell? If so do let me know and I might be able to arrange a deal for you. I do not take commission :) 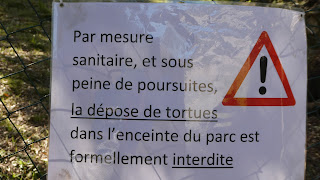 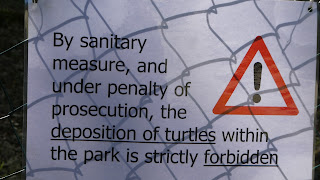 Test your knowledge (or lack of in my case) by following this LINK to a Tour de France quiz for last week's Guardian.